Pučišća, Brač – Josip Radić, A retired Croatian Naval Officer has created the 1st ever stone replica of Saint Peter’s Basilica. The project began in 2014 and was finished in April 2019. And he’s self-taught !

I first met Josip in the summer of 2014, with the Water Polo Cruise that my husband owns and operates.

Since then, we have been coming to Pučišća once a week during the summer months  to share this man’s incredible story with our guests.

Josip, did you always have a love for stonemasonry?

“To tell you the truth, I never dreamed I’d be a stonemason. Growing up on Pučišća, while going to elementary school I saw how much my father was struggling as a stonemason. The craft required so much effort and I just wanted to get away from stone.”

“Once I graduated from the Naval Academy I joined the Croatian Homeland war. In 1991 I became the youngest Naval Warship Commander in Croatia.”

“After the war ended I signed a contract with Gojko Šušak Defense Minister at the time, to become a Military Attaché in the United States.”

“But instead of going to the U.S.A. I ended up in the hospital severely ill. I was 33 years old, weighed 50 kilograms (110 lbs.) and was on the brink of death. My life got completely turned around.”

“I was retired from the military as a Naval Officer at 33 and struggling to find interest in life again.”

“My cousin told me I needed to get a hobby. When I saw him doing some small stone houses, I asked him to give me a bit of material to try and play with. And that’s when it all started for me.”

For the past 20 years Josip has been creating beautiful stone structures. He’s self-taught which makes this all the more remarkable.

His accomplishments include a list of churches, spires, belfries to name a few.

The most impressive is the Basilica of St. Peter.

The Basilica was made to scale using actual architectural plans and drawings.

“I went to Rome and Archbishop Eterović introduced me to people who could help me locate plans to start building the replica.”

“In the Vatican they told me I was crazy and that what I was doing was impossible. They even questioned my sanity. In their mind if I must be crazy to do something so grand, because if it was possible someone would have done it by now.”

“It was an honor to have Archbishop Eterović show me things that are closed to the public. He took me into the Vatican itself, the Vatican Museum and the Vatican Archives.”

“With the help of the Archbishop and the Director of The Vatican Archives, I was given drawings of the Basilica.”

This guy is remarkable. He re-invents himself after an illness ends his military career.

Of all the things Josip has made, my personal favorite is the one he made for my husband and I.

A few of the other pieces I have purchased from Josip over the years. Every summer the collection grows. 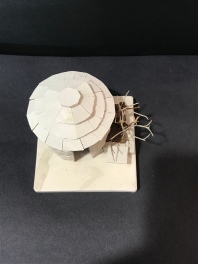 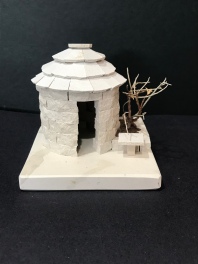 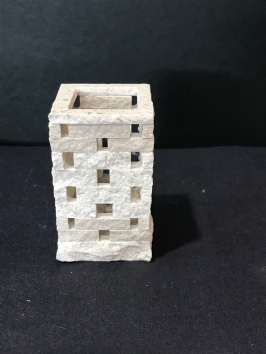