Yeah it’s really spelled that way, and it’s not that hard to pronounce. The H is pronounced like saying “huh” and the var sounds like car only with a v. See you already sound ethnic and native.

Okay so a brief history of Hvar. The first city you may visit on the Island of Hvar is, Stari Grad, which translates to, “Old City”. This is one of the oldest towns in all of Europe. The area of Stari Grad was settled by Neolithic tribes between 3500 and 2500 BC. Remains of their pottery and artifacts have been found…and are still being found. Stari Grad was originally named Faros, by the Greek Settlers from the Island of Paros who arrived on Hvar in 384 BC. In Roman times the town of Stari Grad became known as Faria.

Stari Grad is super old and quaint. I like walking slowly along the boardwalk taking in the cuteness of this town. The main boardwalk has shops and cafes on one side and boats on the other side. It’s charming. I love trying the local food served up by street food vendors. The narrow city streets wind you through the old buildings that have hidden restaurants and small boutiques. It’s a cute quaint town, with a slow- laid back feeling, making it the perfect place to start a 7 day cruise because you’re probably still jet lagged. 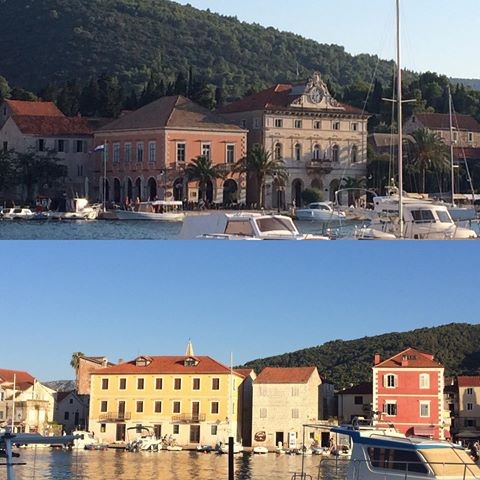 I don’t get to go on every cruise, but I am always available to answer a question so feel free to ask me. I have kids and know what it’s like to travel and encounter new food that looks and sounds funny not to mention smells funny too. Being married to Ivan has given our family 5+ years of cruising the Croatian Adriatic and stopping at the same city and ports you will be stopping. I’m no culinary expert, but I can make a few recommendations from a travelling mom’s perspective.

Ivan is my nerdy little history guy. He will sprinkle little interesting facts during your travels that will make it educational and unforgettable. You will get to see and explore Croatia in a way that most other’s don’t.